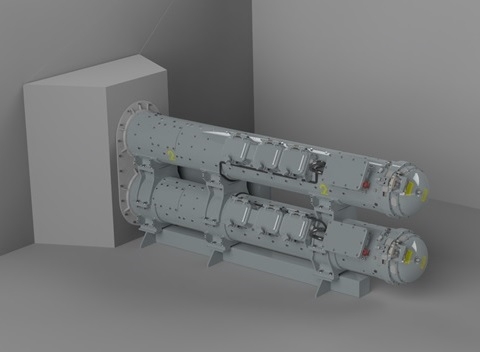 Canadian defence firm JSK Naval Support (JSK) has been selected by Lockheed Martin Canada to supply its Torpedo Launcher System (TLS). The Canadian Surface Combatant (CSC) program is for 15 vessels and as an initial contract JSK will supply four new TLS ship sets to the CSC program between 2024 and 2026.

The new CSC will be an advanced and multi-mission combat ship, equipped with next-generation technology, which will support and protect the Royal Canadian Navy for the next 40 years.

The system was chosen by Lockheed Martin Canada for its weapon-agnostic capability, as well as JSK’s commitment to developing Canadian TLS expertise. The TLS will be built and maintained in Canada, with JSK employing and training additional Canadian engineering professionals to enhance its production and integration capability. This will include a new purpose-built test facility in JSK’s Pointe Claire site in Montreal, Quebec that will be used throughout production to allow for testing and evaluation of completed systems and software and follow on support/training phases of the program. JSK has developed a fully integrated supply chain to ensure full lifecycle support capability throughout the entire program and systems life.

Supplied to Lockheed Martin Canada, the systems will be installed on 15 warships built at Irving Shipbuilding in Halifax, Nova Scotia. The fully qualified TLS will provide a close range, rapid-reaction weapon agnostic launch capability for a variety of NATO standard light weight torpedoes. With a modern TLS electronics suite, the system can calculate target position based on sonar and ship data alongside control from the combat management system.

Brian March, President of JSK Naval Support said, “We’re delighted to be supplying our Torpedo Launcher Systems to Lockheed Martin Canada as part of the prestigious CSC program. The launcher system is an essential component of the combat system, and its open architecture means it is compatible with the latest weapons along with the Mk 46(V) / Mk 54 torpedo. Thanks to this inherent flexibility it offers a durable and future proof solution for the CSC program.”

An established provider of engineering services and in-service support for the Royal Canadian Navy, JSK Naval Support is headquartered in Pointe-Claire, Quebec and is a member of the COVE community in Halifax, Nova Scotia.